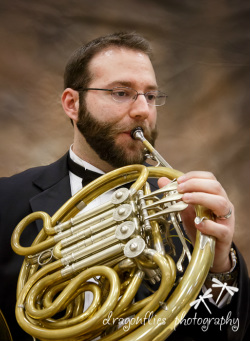 Dr. Joseph D. Johnson is a professional horn player, composer, and educator living and working in the Augusta, GA area, known as the CSRA (Central Savannah River Area). He previously held the second horn position with the Johnstown Symphony and has also performed with numerous orchestras throughout the Eastern United States, including the Augusta Symphony, Charleston Symphony (SC), West Virginia Symphony, and Knoxville Symphony to name a few. Dr. J is active as a chamber musician, soloist, and clinician, having performed at multiple Southeast Horn Workshops, the 2016 and 2020 International Horn Symposium, and as a featured soloist with numerous groups.
Dr. Johnson is an active member of the International Horn Society (IHS). Dr. J served as State Representative of West Virginia for four years and is currently serving on the Editorial Staff of The Horn Call, which is the scholarly journal of the IHS. His articles have been published in The Horn Call, and he is frequently sought after as an adjudicator. Not only does he judge many of the regional and state competitions/festivals in his area, but Dr. J has also judged competitions at regional workshops and is a jury member for ENKOR International Competitions.
As a composer, a few of Dr. Johnson's arrangements for horn ensemble are published by Cimarron Music, including an original setting of the traditional tune, “Danny Boy.” Dr. J has composed several new works for brass, including Flourish for Brass Ensemble, which was performed by both the Savannah River Winds Brass and the Augusta University Brass Studio, Suite for Brass Quintet, Escapades for Brass Trio, and Meanderings for Horn and Piano to name a few. He also has a couple of new compositions published through WaveFront Music, Twenty Etudes for Low Horn and Caccia for Solo Horn​.
Currently, Dr. Johnson is the Instructor of Horn at Augusta University and USC Aiken and served in the same capacity for Presbyterian College. He was also an adjunct professor with Southern Wesleyan University and maintains a vibrant private studio of young horn players in the Augusta, GA area. Dr. Johnson's primary horn teachers have included Dr. Carrie Strickland (AU), Dr. Darian Washington (AU), Robert Pruzin (UofSC), Calvin Smith (UTK), and Dr. Virginia Thompson (WVU). He also studied with Bill Caballero of the Pittsburgh Symphony, and received instruction from Gail Williams, David Jolley, Adam Unsworth, Lowell Greer, and Dr. Marian Hesse. Dr. Johnson holds degrees from West Virginia University (DMA in Performance), The University of Tennessee (MM in Performance), and Augusta University (BM in Music Education). Dr. J currently performs on a Hans Hoyer 801 that was modified with a custom leadpipe.